Join the Defenders as they talk 2003’s Daredevil the Director’s Cut! In 2003, after the success of X-Men and Spider-Man, Daredevil finally got his shot at the cinemas. It was a big success financially but critical reception was mixed to poor. A year later, we got a Director’s Cut which added nearly 30 minutes and Coolio. Did more of this movie make it palatable or did writer/director Mark Steven Johnson bite off more than he could chew? And how much comedy can be mined from a character whose last name sounds like a delicious snack? The Defenders call Ben Affleck and Jennifer Garner to the stand! Join us next week for a look at Frank Miller/John Romita Jr’s “Daredevil: The Man Without Fear”! And then the following week, Daredevil premieres on Netflix! Excelsior!

Join us as we talk about Daredevil and the Kingpin’s first live-action appearance with guest Vickey Tree from Geek Syndicate in her first live-action podcast appearance! Is this 1989 TV movie so terrible that it’s found guilty or is nostalgia and campiness enough to get an acquittal from The Defenders? Excelsior!

Welcome one and all to The Defenders Podcast! Meet your hosts: Claire, Mel, Matt & Robin!

Your hosts:
Claire, Mel, Robin, Matt, Tammy and Will

We are an introcast dedicated to the Marvel TV series on Netflix: Daredevil, Jessica Jones, Luke Cage and Iron Fist.

We cover these shows episodically week-to-week. Claire bingewatches the entire series when it comes out and guides Mel, Will, Tammy, Matt & Robin through the series spoiler-free!

That means, if you have watched the show in one binge, you can enjoy as we break it down in weekly discussion. But if you want to watch along with the newbies, you won’t have to worry about spoilers! 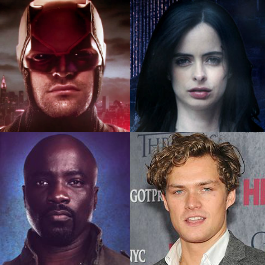